Yesterday Ashley woke me with a text wishing the old family pictures weren't all packed away as she wanted to do a collection of camping pictures. Later she sent me a blog picture with a Blue Mist by Dansk plate; these are the same dishes I've had for 44 years. Ashley said they reminded her of her childhood. I hope she has good memories of happy family meals.

Memories are wonderous & mysterious things. A cousin called last week to tell me her brother had a stroke and while he is recoving speech and motor skills he has no memory of his parents and wife being gone for over 10 years. Like Alzheimers, that seems so sad for both of them as she tells him of the losses of loved ones over and over again.

I believe memories are important parts of who we are. For me memories are often the basis of my art work even when the image is abstract.  That I can't remember a time when I didn't sew and the feelings of accomplishement from some of my early projects informs my sense of self.

This picture is from a quilt I did in 2009 to pair with a poem about an empty chair in Galveston. I grew up on the gulf coast and have wonderful memories of the beach.  This picture reminds me of the adventure of learning to fish with Dad and the feelings we had celebrating one of his favorite pasttimes. 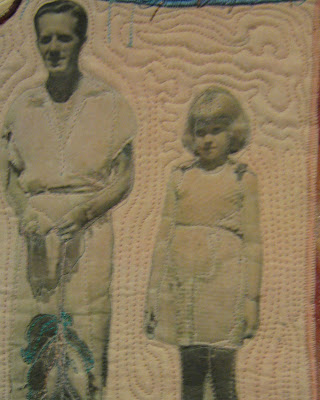 Dad would have been 97 today. He's been gone 4 years and I still miss him very much. Dad could have been the poster image for "Child of the Great Depression". His father had left when he was young and his mother raised 4 children. That hardship made him the "strong silent type". He wasnt' particularly expressive of emotions except anger until he became a grandfather. I remember him holidng Ashley the day she was born. I do thing being "Pawpaw" was his highest calling.
He taught us to love the outdoors, camping & fishing and had a respect for nature before we called it enviromentalism. I never shared his affection for east Texas (to me it felt closed it; to him it represented safety I think) I understood his need to visit and enjoyed trips with him over many back roads. In his last days he still expressed longing for the "Piney Woods". He honed his story telling skills with the grandkids and they loved him for that and other generosities.  I hope they will always remember his pride in his CCC service and the help he could give his mother and younger sisters during hard times. While he was never really suited to city life, but lived in Houston because it was Mother's home and where the work was, he donned a coat & tie most working days for 40 years as a department manager for Sears. This was back when the companes cared about employees and he was proud of his company and his service to it. I couldn't bring myself to tell him how they had cheated him and others when they "sold" to Kmart so that will be my memory to keep. 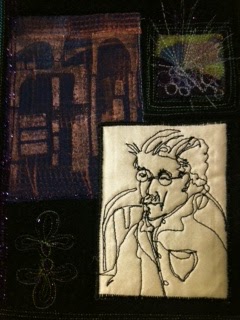 The second time the phone rang this morning it was my nephew. He was calling from the hospital to tell me their baby girl is coming today. Happy Birthday Pawpaw.
Posted by Connie Akers at 4:24 PM