The Week In Between 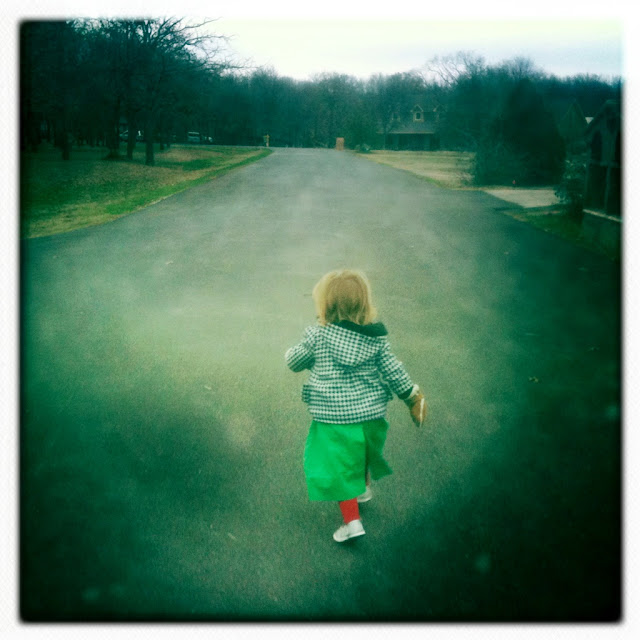 I hope everyone had a wonderful Christmas & Hanukkah.  The days after Christmas and before New Years have always seemed a bigger "in between" time to me than just another week.  It might be all the years of school,  as a student and then teacher,  but I like the relaxed feeling of this week after the build up to Christmas. I do wish we had more emphasis on the 12 days of Christmas but I guess we're tired from all the commercial hype.

Among good things to enjoy are the left over yummy treats before we go on the universal diet in January. I like to use some of the quieter moments for reflection and planning. Whatever you do this week put your heart into it and then march into 2012 with high hopes. I'll be spending most of my time with family & friends. Wishing you a Very Happy & Blessed New Year.
Posted by Connie Akers at 11:43 PM No comments:

I'm rather anxious for 2011 to be over with as it's not been a top year for our family. That's not to say there haven't been some woderful moments of joy & celebration and I hope we have a few more in the final 2 weeks of the year. The stocking are hung and we're on the count down to Christmas. I think of Christmas as a special Beginning and then we get a little rest before we jump into a New Year.

Beside the stockings and ornaments on the tree I added another bit of color to the decorations with a paint chip garland; I'm a loyal Home Depot customer so they shouldn't mind when I take a few extra.

Looking back a bit I just downloaded pictures from our trip a couple of weeks ago so I'll share a few here. The furniture show was a guy's version of Quilt Festival (much smaller but very creative). I'm hopeful that Karl will absorb some of these ideas for furniture in the new year and there will be a new house in the not too distant future. Our abode won't be as creative as the one below at Camp Lonehollow but will share the metal exterior.

In the meantime, I'm finishing up gift projects & doing some baking so that I can take to my rocking chair with a good book (hint to Santa) and cup of tea in those last quiet moments of 2011. Hope you're getting primed for a wonderful holiday with family & friends too. 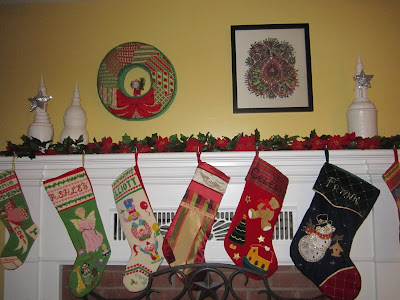 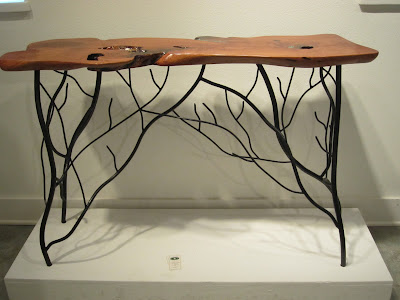 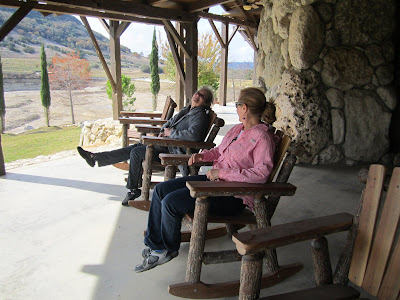 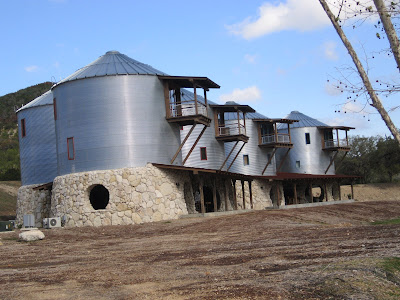 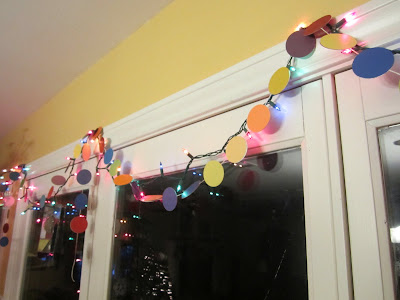 Posted by Connie Akers at 9:13 PM No comments:

The Way It's 'Spozed to Be

When I started teaching way back in the dark ages of 1970 I read a book titled "The Way it's Spoze to Be". It was about the dysfunction of our educational system. No, I'm not going into a political rant.

That title has stayed with me over the years as an expression of my feelings as I ponder how I think things SHOULD be and how they really are. In the last 1/4 of my life I think I'm beginning to learn some important lessons starting with "there's more you don't control than you do" & "just because you think it's spozed to work a certain way doesn't mean it will" & finally "we will get through by Grace".

My closest friend since age 10 wasn't spozed to get cancer but she did. She & her supporters are making the best of a bad situation. She & I ran off to Fredericksburg last week & shopped, laughed & played to exhaustion (I know I was tired). Another very dear friend wasn't spozed to have her husband of 32 years want a divorce but it happened. She is being strong and brave and inspiring as she creates a new life in the Texas hill country.

Instead of doing serious art (what I'm spozed to do "IF I'm a serious artist") I spent this past week making & glittering book paper trees and snow flakes and taking time out for fun with friends. We were spozed to be moved by now so my decorations weren't spozed to be miles away at the back of storage while I'm still in Argyle. My 1970's needlepoint ornaments that live in the cedar chest instead of with the rest of the deco stuff got to be center stage once again. They are hung on the 1/2 price artificial tree (not spozed to get a fake tree as it's not planet friendly) & the Norfolk Pine that barely survived the supper from hell but they look good and I think Karlie will be duly impressed. Now it's on to making the gifts that time allows for. I was spozed to do these months ago. Ha! 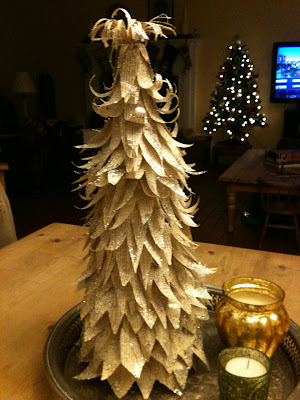 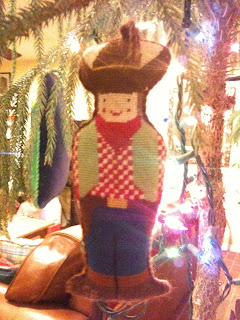 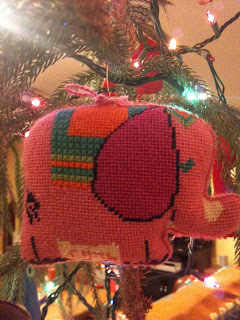 So my point with all this rambling is? Life isn't the way it's spozed to be. Life is what happens while you were making other plans. Accept what is. That doesn't mean that we don't fight for what is right & good. Make the choice (over & over, day by day)to make the best of realities. Together with grace we CAN be people of Goodwill. Enjoy the season!
Posted by Connie Akers at 10:15 PM 1 comment: