Out of the Blue

You haven't seen any thing new here in nearly 3 weeks because I've been slogging through health yuck; nothing major but enough to dampen creative sparks. Being under the weather is NOT fun; we all know that. I seem to add mental fog & blues to episodes of physical dis-ease but don't imagine I'm alone with that. I'm grateful to Karl for taking good care of me and hope what I see on the horizon is light & lightness. Health is a blessing we so often forget to be thankful for until it's threatened.

I'm working on climbing out enough this week to do a bit of work before before we head off to spend Halloween with our favorite "Adybug"(her words). She will be celebrating her cousin/friend's 5th birthday with various pop singers, fairies, animals, ghouls and goblins. I managed to snag a wondrous "Fairy Grandmother" outfit for all of $1 at the thrift store yesterday (some manufacturer dropped dozens of bridesmaid dresses and Halloween is probably be the only time they will see light again unless some fiber artist grabs them for the yards of deep green & teal acetate). With this dress and a wand borrowed from munchkins next door I'm set to grant good wishes all around..... Don't we wish making things happen were that easy?

I never intended to be ​particularly political in my blog but I find myself increasingly agitated by and focused on the state of affairs in our country. I'm working on ways to express these ideas in a quilt. I am inspired by Kristin LaFlamme, among others. She is an army wife and is doing very powerful work about that role. Also check out Richard Wilkinson on Ted.

Last week I raised the guestion with my studio group as how do you know when you've gone beyond being influenced by and moved into "copying" another artist. I'd like to hear others thoughts on this issue.

Toward the end of getting back into the creative grove, I've done more indigo dyeing. This round included over dyeing some rather lackluster formerly dyed and/or printed pieces; batting & curtain fabric for a small quilt and more wardrobe updates. I highly recommend indigo for the later; it's a pretty instant change and covers even complimentary colors very well giving some nice grey blues. If you're tired of your wardrobe and have budget constraints this is a real lift. 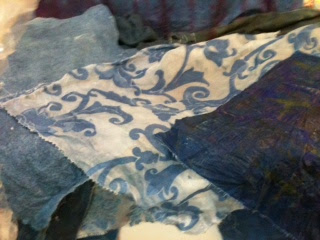 Wishing you great new creative insights come "out of the blue".
Posted by Connie Akers at 6:23 PM No comments:

I am the VERY lucky recipient of Masters Art Quilt vol. 2. I won it on Deborah's blog & all I had to do is leave a comment; an easy & enjoyable way to win a great book. Thanks Deborah & Lark Publishing for the inspirational addition to my library. 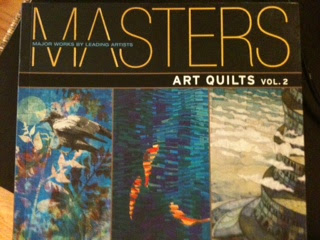 They are announcing Nobel winners this week and that got me to thinking about Masters in different fields. It is obvious that the way to get to the top is lots of work and practice. Some years ago I met a favorite artist/writer, Faith Ringold. She spoke of publishing her first book in her 50's and how many very talented people she'd met who weren't willing to do the necessary work to "succeed". She said if she had listened to her mother she'd have gotten a "regular" job years before and Tar Beach would have never been published which would be a loss for children the world over.

I always hoped that wouldn't be me, giving up before I found some measure of mastery or success but lately I've felt rather like a slacker. I can't change the past but I'm working on stepping up my game with more focus on my art quilting & related subcategories of art, as well as life in general.

I've recently jumped into Indigo dyeing and renewed challenging myself with Photoshop. Maybe I'll have some successes to post at a later date;maybe I should narrow down my interests but that's under consideration and yet to be decided. For now I'll say I hope I'm always willing & able to stay open to new challenges and be a lifelong learner. Maybe that will be my area of mastery. Connie Akers, Master Student. I figure I could do a lot worse. Now back to the machine where I'm quilting blocks that my great grandmother pieced before I was born. This is for my great nephew Danny & I will count it as a success in passing along family history. 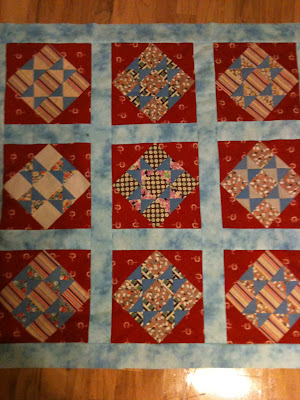