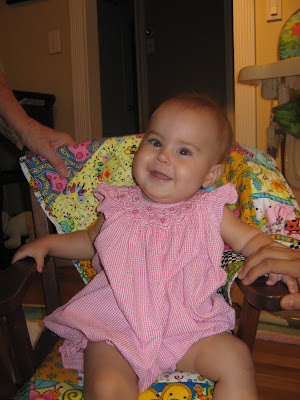 Last weekend we celebrated Karlie's first birthday and it was a great party.  I just had to make her some thing for the occassion so I did a dollie quilt & cushion to go with the baby doll and rocker we gave her.  I had saved some of Heidi Pridemore's fabric and love that it's Lady Bugs having a tea party.  I some time call Karlie my little lady bug.
If you read Ashley's blog you see the beautiful bracelet that she made Karlie.  I almost cried when I read her post about how much she loves Karlie and I certainly agree that I smile whenever I look at her.
On the 19th we welcomed a new friend for Karlie, the grandson of our oldest friends.  This is the baby who has the quilt I made his mom in his nursery. Now I NEED to make something special just for Leo.
The rocker was mine when I was young; somewhere in storage is a picture of me in it at about 2. It originally had a music box that played when you rocked and I had hoped to find a replacement but didn't have any luck.  If anyone knows a source for one I'd really appreciate hearing about it.
This week my brother is visiting from Utah.  He seems to have brought some cool weather with him; it's only been in the 90's and actually tolerable to get out early & late.  Like most transplanted Texans who come back to visit, he wanted good Mexican food so we ventured down to Ft. Worth and played tourists on Thurs.  When he's around I depend on him for photography but since he still uses film I don't have any shots of the outing.  He's also a bike rider so he adjusted the seat and brakes on my "new" bike (purchased at university salvage center) and confirmed that I got a good deal.  Last night we ventured out for a short ride with him giving me lessons on gears & shifting.  He's out every morning doing several miles but I'll have to build up to that.  He wanted me to go this afternoon but I wouldn't budge from the sewing machine.
After the week of traveling, painting & purging I really, really needed some sewing therapy. While the guys watched cops & robbers tv I came up to the studio.  I am enjoying the order and hope that I can keep it that way and work while the house is on the market.  I'm scared about the limited space I'll have in the time between here and the new house.  I'm contemplating setting up shop in the Airstream but won't be able to completely take it over.  All that is yet to be seen.
Any way, this afternoon, I NEEDED to be in the studio.  I worked on bits of a collage for an auction Ten Second Studio is doing and also a project for C&T Creative Troupe.  Those both have to get done before mid Sept. and there's lots of other things on the calendar too.
I have the collaborative quilt back from Lu but before I get to it I needed to practice and do a little mindless or at least streaming sewing.  I sorted out some of my "bits" and considered felting but rather did a fused and sewn base fabric for ATC's for the Sept. DAFA trade.  I went back and put some foil on the exposed fusible and since I had a pretty big piece I used some of it for a belated birthday gift - vase/pencil holder/whatchamacallit.  It's not stiff enough to stand alone so it will go around a jar (now to find one the right size).  I guess I'm into squiggles & such.  Yesterday while Rick played on the computer and we talked about Dad and old country music I sewed up a tote with part of the "Jackson Pollock" fabric I had created in the spring with the Wonders group.  I gave the bigger piece to a friend who saw it and said she'd stretch it and hang it in her home. Knowing I won't have room for it I'm glad it will be appreciated. 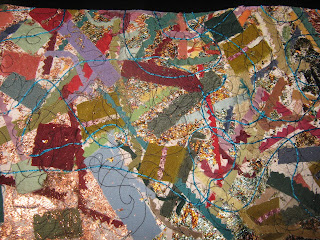 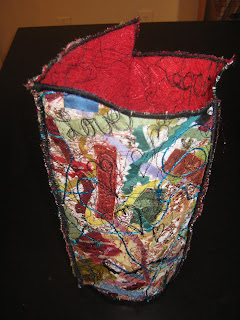 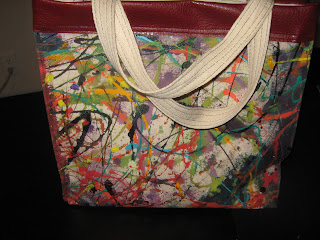 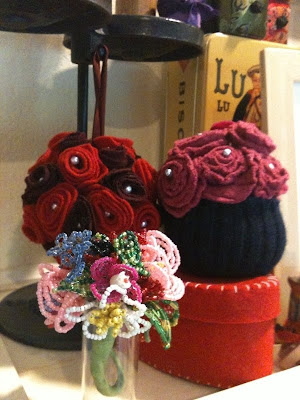 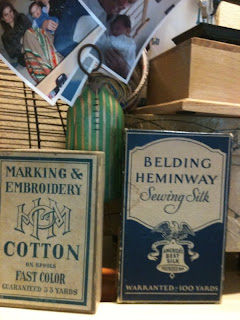 Right now I'm taking a break from painting the studio.  I tried to tell myself we could get away with not doing it but good judgement got the best of me and if I'm to present this room/the whole house in the best light it needed to be done.  Trouble with ideas like this is one leads to another.....

Every thing is piled in the middle of the room and I also have a birthday sewing project to finish before Thurs. and want to go play with dyes with friends tomorrow.  But some time you just have to take a break.

While stopping to check emails and browse around a bit I came on this site.  I've enjoyed some of Hugh McLeod's cartoons before and now think his book sounds good - especially the first 25% that he offers for free.  I'll put that on my check out later list.

Last week I took a whole day off.  I went to Lu's to celebrate her birthday (belatedly) and it was a a lovely day. We discussed our quilt (she's started quilting) and other projects and then went off to lunch and shopping.  I lucked out in both departments - transitional clothes on sale and ideas for the new house decor.

To add a bit of color to this post I'm showing the beaded flowers I put together for Lu.  She added them to her studio shelf where her lovely felt rose pin cushions are.  In the sorting & purging of beads I had found bits of flowers left over from Ashley & Frank's wedding (all the attendant's bouquets included beaded flowers as keepsakes as did the bouquet Ashley "tossed" - actually gave to her cousin).  Rather than toss the bits or put them back into storage oblivion I put together this group as a token of love and friendship.  Another bit of Lu's bd box was the old silk thread box; she already had the cotton so it has company in it's new home.

Hope your day is full of color.  Now I'd better get back to the white walls.
Posted by Connie Akers at 12:12 PM 3 comments:

Checking in and staying out of heat. 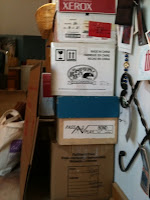 It's a slow "news" week; purging and packing continue (won't I be glad when there's a different story to tell).  Empty shelves and packed boxes are about the most inspiring thing I have to share.  It does make me anxious for the blank canvas of a new space to grow into a home and of course, I am hopeful someone will find this place to their liking.
Thanks to Karl & Justin the garage is almost a clean slate of bright white.  It  certainly it looks the best it has in lots of years.  K & I battled the heat yesterday (official high temp 104) to get it cleaned out.  I wimped out today and came up to continue the tackle in the studio.  Trim paint accidently got carried off to chemical disposal so we'll get more this week for the windows, doors & touch up on the front porch.  Karl's new mailbox is the most creative new thing around here lately.   Actually he's working on a really neat rough hewn mantel right now but it's for someone else's new house.  Think I'll go fix him some ice water. Maybe after grocery shopping I'll take a sewing break.  Stay cool. 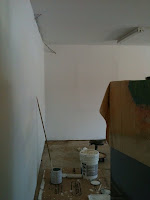 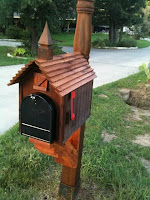