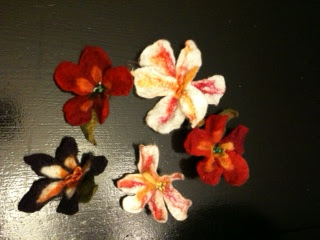 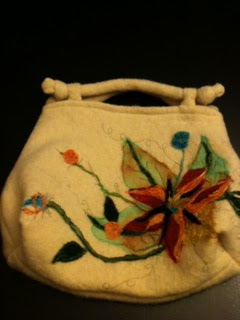 Yesterday I helped my friend, Suzanne Morgan, in her booth at the Dallas Quilt Show. It was fun to be among the beautiful creations of so many talented artists & artisans. I enjoyed demonstrating needle felting with Suzanne's great hand dyed wools & silks. She has some new patterns that she is selling so I made a few flowers and the purse as samples for her. As I was making these I thought about my mother. I could imagine her liking these; I could even be making her a birthday gift and then she'd want to learn how to do it too except she's been gone 12 years.

﻿
Martha Kate McCrory Ashley was a city girl through & through. She was born in Houston in the house I later lived in from age 2-10. She was so anxious to leave that house for a newer, bigger one that it took me years to realize it's charms. It came to inhabit my dreams and inform my love of old and slightly battered spaces but for Mother it held sadness. When we left there it was "a bad part of town". I went back a few years ago as it's only blocks from the convention center where the International Quilt Show is held and the area is changing due to it's close proximity to downtown. Mother probably would still have wanted to be gone from there.

I have come to understand how events from our early lives stay with us always. To Mother that house represented loss. Her father had lost his business during the depression. He was gone before I was born but I got the impression he wasn't a very nice man to my Grandmother or his children after that.

My early memories there were happy and often included aunts & uncles & cousins. That changed when Mother's sister died at 32 when I was 5. After that I remember sensing Mother & Grandmother being sad under the surface even when they were smiling.

Mother loved flowers but if she'd been able to afford to buy them I doubt she would have spent much time outside. That was my Grandmother's and then Dad's domain. I think of Mother's place as being at the sewing machine or with some kind of needle in her hand. She LOVED to sew. She worked for an insurance company most of my growing up years so Grandmother took care of cooking & laundry as long as she was able.  Later when Mother took over the kitchen, she was very good at it, She relished her reputation as an excellent cook and enjoyed feeding family & friends. Still for me the fondest memory is of her sewing. I feel blessed that she passed that passion on to me & hope that what I stitch with my hands brings her honor and smiles.

Emily Lynn Hammitt was born Thurs. on Dad's birthday and I think of you 2 smiling down on her. Love you Mom.
Posted by Connie Akers at 10:36 PM

Thank you so much for helping me Connie!It meant so much to me! Your work is just amazing.